OUR VERDICT: Rocked that town

Our Liverpool IPO schedule arrangements had all been planned when we found out The Katmen were playing in Eric’s on Mathew Street on the Friday night. This meant re-arranging things a bit. Well, not actually re-arranging….... just dropping what was planned because we weren’t going to miss this chance to see The Beeb’s current top guitarist Darrel Higham and Minty’s long-time favourite, Slim Jim Phantom from The Stray Cats.


Co-incidentally the Beeb had just come into possession of the hard to find Eddie Cochran book that Darrel had written years ago and hoped to get it signed. The third member of The Katmen is Al Gare, stand-up bass player of Imelda May’s band.

We got into Eric’s and it was already starting to fill up with Rockabilly guys and gals all dressed in their finest Rockabilly clothes, hair-do’s and hair grease. With drinks ordered we made our way to the front of stage, determined to get a good view of the band. We think their TV appearance on LATER days before had really bumped the crowd up.

Excellent support came from an unknown to us, but obviously big in this scene, John Lewis. With a small Fender amp, a stomp board and an unusual looking guitar he proved himself to be no slouch when it came to guitar playing. He played a selection of his own songs as well as some covers and he went down very well. In fact we ended up buying one of his CD’s we were so impressed.

After John had finished and the lights went back down it was time for The Katmen to come on.

Al led the band out and we were soon off to a flyer. Darrel really is huge in the Rockabilly world and certainly dresses the part too. With a black embroidered Nudie like shirt and turned up jeans he looked great.
Armed with a big archtop Gibson and his Gretsch White Falcon sitting in the wings Darrel sounded as good as he looked. The set list consisted of tracks from the new album as well as some covers like Eddie Cochran’s “Nervous Breakdown”, “A Big Hunk o’ Love” by Elvis and Bruce Springsteen’s “I’m On Fire.”

﻿
They played a blistering set before the quiffs started to fall due to the sweat. Slim Jim treated us to The Stray Cats’ “Rock This Town” and that just about brought the house down. So many people STILL love The Stray Cats obviously, including us.
﻿
They played for about an hour before coming back for an encore. When they DID come back on they fired right into another Eddie Cochran classic, “Something Else.” This was swiftly followed by the lead track from the new album “We Need Elvis Back.” Last song of the night was Johnny Burnette’s “Rockabilly Boogie.” This was the perfect song to finish such a great night of Rockabilly music.
Darrel has quite a few albums out, but they all seem to be either hard to get a hold of, or the prices have just sky-rocketed on them. Thankfully they had the re-issued first Katmen album, now with bonus tracks, for sale. Sorted! 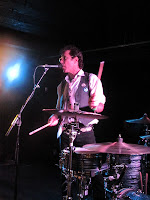 We met up with Al Gare outside and had an interesting chat with him. Out of the hundreds of gigs he’s done with Darrel in Imelda May’s band, he remembered the gig we were at two years ago in Los Angeles, telling a funny story about the Burlesque dancer who was at the gig.

As we were talking, Darrel and Slim Jim Phantom came out and Al very kindly volunteered to act as cameraman so we could have our picture taken with them. The Beeb chatted to Darrel about guitars, and the fact that the White Falcon was just sitting there the whole night UNUSED just to tease him. Minty on the other hand just turned to jelly, finally getting a hug from a Stray Cat after all these years! Another terrific gig and we were so glad the timing of it worked out so well for us.