The tribute weekend, on what would have been Pete ham's 66th birthday was the unveiling of a blue plaque to his memory and a tribute concert. We were given the heads up about this event on Facebook, thanks to Nelson Bragg, at the end of last year. The Beeb had just turned into a teenager when Badfinger started having their run of hits. They were part of the soundtrack to his wild teenage years, he says. This tribute concert was something he didn’t want to miss, so tickets were bought and a hotel booked the very night we learned of the gig.

We left very early on the morning of the gig to make sure we could make the most of Swansea. It was a lovely morning weather-wise, and we got there with plenty of time to spare. So we made our first stop the Library in the Civic centre where a Pete Ham/The Iveys/Badfinger exhibition was on display.

Much to The Beeb’s chagrin, Minty found a copy of Dan Matovina book “Without You: The Tragic Story Of Badfinger.” It was all she could do to stop him trying to walk out with it under his jacket, rather than pay  £200 on Ebay. Well done to the library for having the exhibition in the first place. There is a whole Badfinger/The Iveys section of books, including old fan magazines, and a special display of photos and hand written song lyrics.

After that, we made our way to Ivey Place, and Swansea’s railway station where the Blue Plaque unveiling would take place. Things were still being set up, so we managed to catch something to eat in a classic “greasy spoon” café just across the road. Minty managed to scoff the unusual offering of three fish fingers in a roll. We’ve never seen this anywhere except Swansea.

There were maybe 40 or 50 seats placed in front of a stage when we got back to the station, and we managed to get seats in the back row, unlike the very many people who turned up just after us. After a couple of well received speeches and songs, there was a collective dropping of jaws when Lorraine King sang “Maybe Tomorrow.” There was a spontaneous applause from the audience as she sang her heart out, and her voice just shot into the stratosphere. Truly a spine-tingling moment. The Beeb had his sun-glasses on and says there were no tears leaking out from behind them, but that’s not necessarily true!

Pete’s daughter Petera and David Phillips, the Council Leader and a fine Scotsman to boot, then unveiled the Blue Plaque. What was really nice was the fact that this was the FIRST Blue Plaque awarded to anyone in Swansea. It’s so fitting that it was awarded to Pete Ham.

An added bonus was meeting the lovely Petera who turned out to be another Glaswegian. We also met for the first time, Sue McGookin and her husband Bob, previously only known through Facebook. We arranged to meet up at the gig after booking into our hotel.

Our seats at The Grand Theatre were front row of the Upper Circle balcony (not good for those with a fear of heights as Minty has!!). The gig itself started off well, with some local artists doing their bit, including Mal Pope who appeared to be one of the main local guys who had helped to organise the whole weekend. That was a nice little warm up for what was to come from the main band, led by Bob Jackson. 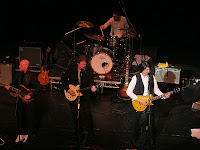 Bob joined Badfinger in 1974 and has carried the baton ever since, with his own touring band. He seemed to be a bit nervous with having responsibility for the evenings music placed firmly on his shoulders but he did a great job though. We were treated to “No One Knows”, “Take It All”, “Name Of The Game” and loads of others.

The band was joined by Dai Jenkins and Ron Griffiths from Pete’s early days in The Iveys. “Come And Get It” was really energetic.

Bob managed a very moving version of his own Pete tribute, “I Won’t Forget You”, and then topped it with a tear jerking “Without You”. After the BIG HITS, we were joined again with the two Iveys’ for an extra rousing encore of “Come And Get It”. This really had the place rocking, despite the abundance of walking sticks in the hall!

We then had a nice meal with Sue and Bob, and after the goodbyes we headed off to the pub where the band had invited all of the audience to an after show party. It was here that Bob Jackson really shone. Free from the responsibility of being in charge of the Grand Theatre stage, he really did sing his heart out. Not only that, he seemed to be right up for a party. Well done to him and the rest of the band who came along. They made the night even more special by having such a great jam session.

The next morning we went for breakfast in the greasy spoon, before heading up to Morrison Cemetery to see the new memorial stone placed there for Pete. We met a real Swansea character, and long-time Badfinger fan in the café, who came out with the immortal line, “Enjoy yourselves at the cemetery!”

When we got to the cemetery, the memorial stone looked quite magnificent, and really stood out from everything else around it - it was not hard to find. It was nice to chat with some of the American visitors who had travelled over from the San Francisco area for the event. The Beeb left one of his plectrums to honour Pete.

This was a lovely weekend of Pete Ham celebrations that so many people put a lot of hard work into making happen, not least of all Dan Matovina and Bob Jackson. As sad and tragic as the Badfinger story is, this was a weekend of joyous music that touched the hearts of a lot of people, including Minty, who had her ears opened to a lot of new songs she never knew beforehand. Music that keeps on giving. 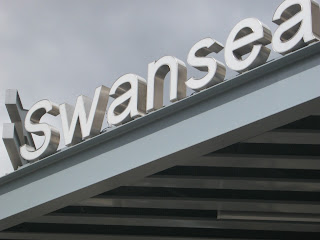