We got to Bush Hall early enough to get a standing place second row from the front and got chatting to some characters from the same family who obviously knew The Cactus Blossoms and the whole hillbilly/rockabilly festival scene. One of the band had even come out to say hello and have a few pictures taken. Straight away we warmed to them - no airs and graces and they seemed to be really genuinely nice people.

Despite having different family names, The Cactus Blossoms are two brothers, originally from Minneapolis who really show how keeping it in the family generates a special blend of vocals.

Much as the boys would like us to compare them to artists other than The Everly Brothers, you cannot escape the fact that they do sound like Don & Phil - it is obviously a family thing.

However, other influences such as Hank Williams and Woody Guthrie and that whole 1940's country sound really shone through their whole set.

The Beeb was quite taken with the 1950's authentic wee guitar Jack was playing. A real piece of vintage beauty.

They highlighted songs from their excellent album, "You're Dreaming", produced by JD McPherson. This album has so many great songs on it, the upbeat "Stoplight Kisses", the beautiful "Powder Blue", and maybe the best live performance of the night, "Adios Maria". this last song had the whole of Bush Hall singing along.

For an encore they dedicated Chuck Berry's "Brown Eyed Handsome Man" to Barak Obama, managing to namecheck Michelle too. It was pretty clear what they thought of their new President!

I think we have been lucky to catch them in such an intimate venue. The next time we see them its a certainty that will be bigger venues they play. Who knows....the Albert Hall?

Colin Blunstone is like a fine wine...... gets better with age!

We have seen Colin perform many times, both in his solo shows and as part of that great 60's band, who have had a new lease of life since the turn of the Millennium, The Zombies, and we were really looking forward to seeing him on stage at one of the most iconic London music venues, the 100 Club.

The support act was Emma Stevens, someone we had first come across when she played at the London IPO festival in 2013. At that time she was bubbly, energetic and had a clear passion for music and enjoyed every minute of her performance.

Almost 4 years on, in which time she had some great exposure on Radio 2 and in particular from the late great Terry Wogan, she has not changed a bit. She is still bubbly and comes across as absolutely loving being a musician and very grounded as well.

Tonight we had a set of her own songs, playing guitar and for a couple, ukele. There is something infectious about Emma - she always manages to keep a happy vibe throughout her songs, even when the underlying topic is tinged with sadness, such as the song she wrote to remember her Mum by.

A great set and it went down very well with the audience too.

Colin was backed tonight with the touring Zombies' drummer Steve Rodford, plus a bass player, keyboard player and an exceptionally expressive guitarist. Usually as you age, the ability to sing as well as you did when you were in your 20's fades quite rapidly. For some reason the opposite is true with Colin. His voice just seems stronger and stronger every time we see him.

The venue was packed (and extremely hot!), and our "space" was just right of centre stage so we had a good view. A set of solo songs mixed with some Zombies songs, was perfectly balanced and sounded great.


The gig was filled with lovely little anecdotes from Colin as well as that wonderful singing voice. Colin is never slow when it comes to praising the song-writing talent of his friend, Russ Ballard. "I Don't Believe In Miracles" is ALWAYS a highlight.

Misty Roses is another bit of a show stopper every time.

The set list is shown below, so you can understand what a great show this was. 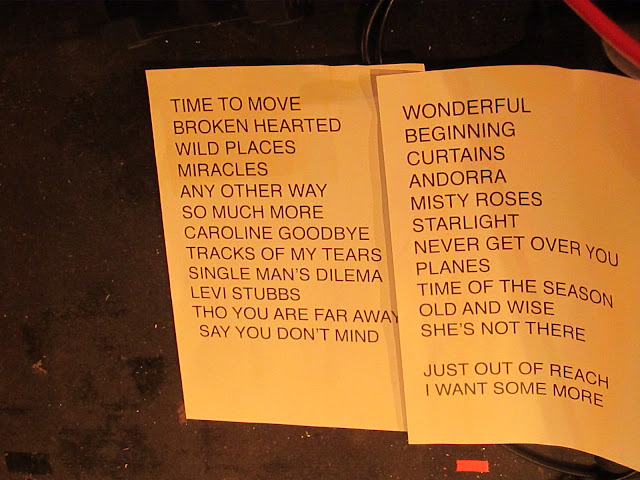 
It has been 37 years since powerpop giants The Rubinoos played in the UK and with support from our favourite UK pop punk band the Surfin' Lungs this was a much anticipated gig.

Rain, a late change of venue and a rail and tube strike did not deter the audience who attended in abundance and there were a few familiar faces in the crowd too. The place was a sell out.

Wearing their trademark white jeans, surf shirts and converse sneakers, the Surfin' Lungs did a fantastic job at warming the audience up.

They powered through their set, giving us a mix of songs from their recent album and some core favourites from their extensive 30 year back catalogue.

The sound was good, great vocals, twangy guitar, everything you come to expect from this great foursome. The crowd were dancing - just fabulous.


Always a treat to see these guys play live and really pleased they got this gig.

The Rubinoos were one of our early connections when MySpace was all the rage but in all fairness we were not overly familiar with their songs. The merch table put that right as we snapped up a few CDs.

They demonstrated their versatility, opening with all four members grouped together doing an acapella "Mr Sandman" before the powerpop was turned on.
"I Wanna Be Your Boyfriend" had some of the guys in the audience wishing they were teenagers again.
They did slow things down a little when we were treated to another acapella song - this time a version of The Temptations "My Girl".
As if THAT wasn't enough, a note perfect version of the old Flamingos classic "I Only Have Eyes For You" was just stunning to hear.
"Run Mascara Run" and "Shake Some Action" really rocked too.

Although we sensed a faux reluctance to do it, they did include their version of "I Think We're Alone Now" in their high octane, brilliant set.

What a night to remember. This was the best gig of 2017, even though we are still only in the first couple of weeks of the year- we really don't think another one will top this, for the sheer reaction of the audience, pure pleasure and fun we had and the fact we met up with so many friends.

Hope they come back for more gigs some time soon.