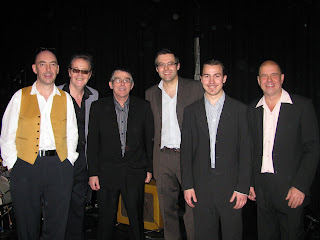 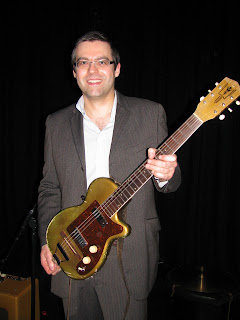 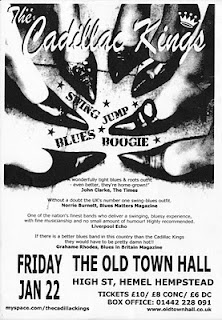 www.myspace.com/thecadillackings
www.cadillackings.co.uk
The Old Town Hall could not have stood up to any more shaking that it did tonight when The Cadillac Kings rocked it to it’s very foundations. This was an evening of 40’s and 50’s West Coast Jump, Jive, Boogie and Swing songs performed brilliantly by a band who’s love and enthusiasm for the music was plain for everyone to see and hear.

The old songs are complemented perfectly by the bands own original songs.
The band is a great mixture of experience and youth. From Mike Thomas’ avuncular vocals, to new kid on the block Henri Herbert’s virtuoso keyboard playing, the band played almost 30 songs over two sets in the fastest couple of hours we’ve known!

Gary Potts wailed his harp all night hardly coming up for breath apart from when he did his vocal duties. Mal Barclay played an old guitar that came straight out of the 50’s. Looking nothing less than a plank of wood with strings attached, the different tones he squeezed out of it all night was miraculous. This was all done without the aid of any effects pedals too, making his guitar playing all the more impressive.

Paul Cuff on double bass and Roy Webber on drums provided a great foundation for the band to build on.

The opening number, Jimmy McCrackin’s “Gonna Tell Yo Mama,” set the tone for an energetic, foot tapping evening. What followed was some astounding keyboard tinkling from Henri, who was looking so laid back at times you would almost think he was asleep. His effortless playing was like watching a DVD on fast forward.

A good helping of humour was added to the evenings show on songs like “Who’s Bin Lickin’ My Chicken?” and “Mr Nip And Tuck.” These original songs are mixed seamlessly with covers of James Harman, Brook Benton and Champion Jack Dupree. “The Spirit Is Willing,” was dedicated to a couple in the audience who were celebrating their 38th wedding anniversary!

It’s no wonder that this band has won so many awards from the Rhythm and Blues fraternity over the years. They are such a good live act, and after listening to the CDs we bought they’re a great recording band too. We were lucky to catch them in an intimate venue like the Old Town Hall, but it’s possible to imagine them rocking a festival crowd too.

This is one band we’ll definitely be going to see again.
No comments: