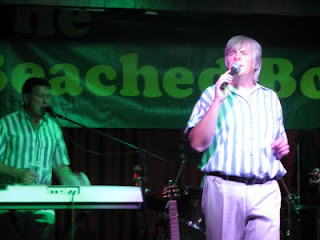 
In August’s Record Collector magazine, Kingsley Abbott (highly respected music historian) said that The Beached Boys are currently considered the best Beach Boy styled band on the circuit. Their show at Tropic at Ruislip validated that comment.
This was a popular event with a long, but orderly queue forming from 8.30pm to gain entrance to the hall. The band took to the stage an hour later, dressed in the blue Pendleton style shirts that were synonymous with The Beach Boys in the early 60’s. Straight away, they had the audience up and dancing with “I Get Around”, “California Girls”, “Surf City”, “Little Deuce Coupe” and “All Summer Long”, bringing a bit of California sunshine to Ruislip. Other highlights from the first half of the set were “Don’t Worry Baby” which included a brief bit of “Hushabye” during the instrumental part, and a superb version of “Breakaway”: a song that Brian Wilson and his band have had difficulty mastering for a live show. Tonight The Beached Boys nailed it.

Following a 30 minute break, the band, now clad in Hawaiian shirts, started the second half of their set wasting no time with a lively “Heroes & Villains” which ran straight into “Fun Fun Fun”. The party mood continued with a few songs from the Beach Boys’ “Party” album and a great version of the surf instrumental “Misserlou” and a couple of early surf classics, “Surfin’ Safari” and “Surfin’ USA”. The audience were dancing throughout, even when the band slowed things down a bit with “Til I Die” and “Sail On Sailor”. As the clock edged towards midnight, the band had been on stage for 2 hours in total, delivering loads of great Beach Boys songs and they closed the night off with “Good Vibrations”.
The audience called for more but unfortunately, curfew time at the club is midnight, so the plugs were pulled on what was a great night.

The performance tonight was excellent. The band were tight, the vocals and harmonies nailed, they really seemed to enjoy themselves on stage, and the audience loved them too, dancing and singing along throughout the show. If the band come to a town near you (check out their website below for details of their gigs) then make sure you go along. You are guaranteed a night of Fun, Fun, Fun, even if you are only a “light” Beach Boys fan. If you love The Beach Boys you won’t be disappointed either, especially as the band does perform some lesser known songs which go down very well when there a few Beach Boys fans in the room.
The last time we had seen a couple of members of the band was just last month, when they joined Anny Celsi and Nelson Bragg (Brian Wilson's percussionist) on stage at London's Luminaire Club, providing backing harmonies for a rendition of "In My Room".

The venue is a decent sized hall: a bit of a free for all to get a table and a seat, but the bar service was good (the bar man remembered our round, which is always a positive sign!), the loos clean (and no queues), and there is plenty of parking.

Friday night is Tropic at Ruislip’s club night, where live music is promoted and enjoyed. Check out their link below to see forthcoming events. 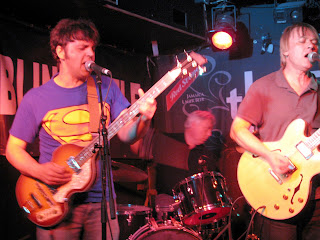 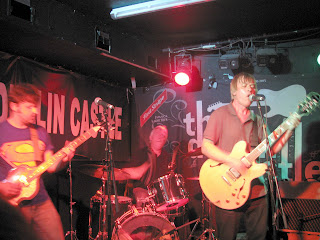 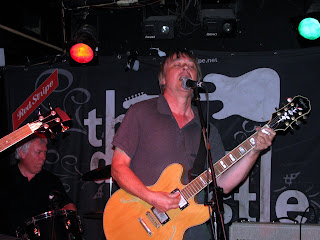 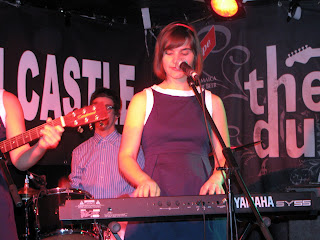 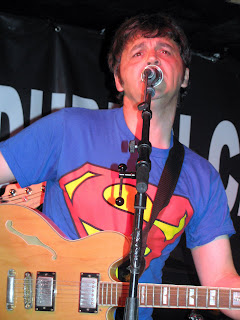 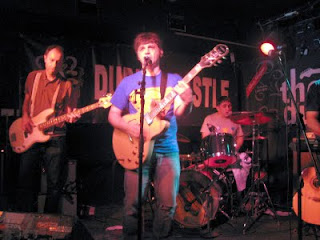 We wandered through to the back room of The Dublin Castle pub not long after the first band had started their set. The room was quite full (something we had not seen at recent gigs we’ve been to) and stayed full right the way through the four bands appearing tonight.

We had not heard of The Invisible Lead Soup before and they sounded good. At times the keyboard was a bit ‘Sale of the Century’ but on the whole, they had some good songs, nice vocals and were interesting enough to keep us in the room. They included a good version of “Nancy Sinatra” in their set.

Next up was the man we had travelled into Camden to see, Paul Bevoir, (www.myspace.com/paulbevoirmusic) who was playing with his band, the Family Way. Unfortunately technical problems with the keyboard meant that the start was delayed somewhat, which resulted in a shorter than planned set as the sound engineer (who was the same one at last night’s gig in the Wilmington Arms) was quite strict on time. Paul has a real sunshiny pop sound that warms you from your hair follicles right down to your little toe and back again, giving you that Ready-Brek glow when you hear his music. His set included some of The Jet Set tunes, and also some of his solo work, including one of Minty’s favourites “Too Late Now”. His drummer added fantastic backing vocals and the sound was great. It’s a shame that they did not have the chance to make up all of the lost time from the keyboard problems, but their set, although shortened was really incredible. We just wish he played more gigs so we’d have the opportunity to see him more frequently. If you know Paul's songs then you know they make the world that little bit better just by being there.

The Cola Jet Set (www.myspace.com/colajetset) had travelled from Spain, and had already performed at some UK gigs, including the Indietracks festival. We had seen this group a couple of years earlier at International Pop Overthrow and had forgotten just how good they sounded. They were singing in Spanish (until their last song which they performed in English) and we didn’t understand a word they were singing (there was one about Chocolate), but they had a really happy, foot tapping summery sound. The main vocals were provided by Alicia and Ana, whose vocals really blended well together. The group appeared to enjoy themselves, smiling all the way through, which just made the songs sound even brighter. Towards the end of their set, Paul Bevoir’s drummer joined them on stage and added some falsetto ‘ooohs weee ooohs’ which really added to the summer sound.

The final band on the bill was London’s own Mod Gods, SQU!RE, (www.myspace.com/squire) a band that has been around for many years, and another group we have seen a few times at the IPO. The usual bass player (James Meynell) had injured his hand, so bassist duties were performed by Paul Bevoir, who did a sterling job. Right from the off, the audience were dancing as Anthony Meynell powered through a great set list that included “Does Stephanie Know”, “Girl On A Train”, “Walking Down the Kings Road” and finishing with a great rendition of “My Mind Goes Round In Circles”. We felt that SQU!RE could have played for much, much longer, had the sound engineer let them, and the audience did call for more. But curfew had obviously fallen as the sound engineer turned the stage mics off, and increased the volume on the ‘in between’ music, signalling The End.

It is unusual, when you have 4 bands appearing on the one bill, to enjoy every one of them….. tonight at The Dublin Castle, we did just that. A wonderful line up and well, well worth the drive into Camden for the evening.

A small word on the venue itself….. it is the home of Madness, and they have photos of the band all over the place. The bar staff were great… waiting time was minimal and the barman recognised The Beeb whenever he went to the bar and remembered his requirement for a bottle of Becks (it’s rare these days for a barman to even acknowledge who’s next in the Q, let alone remember what the punters are drinking, so good on the Dublin Castle).

And a final customary monologue on the loos…….. clean, well-stocked, hand dryers that worked, and locks on the door… fine by Minty. 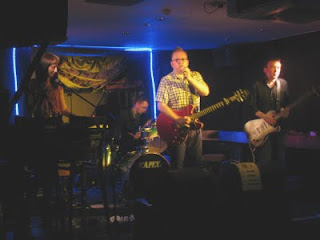 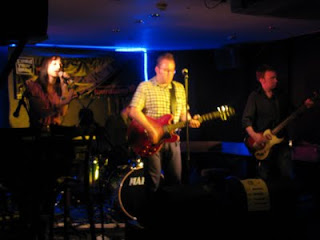 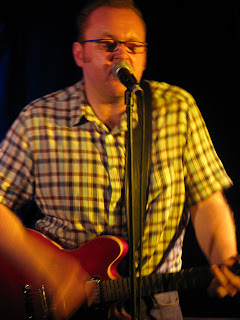 The Understudies, (www.myspace.com/wearetheunderstudies) whose Myspace page lists their roots as being Glasgow/London/Edinburgh, (but are now based in London), are a band we saw at this years’ International Pop Overthrow in Liverpool and we jumped at the chance to see them play live again. It was a push to get to Clerkenwell in time (they were first on the bill) but we made it just as the band were about to take to the stage.

Straight away, they launched into “Chip Pan Glam”, which is a belter of a song to start a set with, with reverbs of T-Rex style guitar mixed with the female vocals of Bree giving it a bit of a Camera Obscura sound. They also sang about “Flicknives”, “Wanting Vs Getting”, which has a very nice "Phoenix Nights"glockenspiel throughout, and the very catchy “A Girl I Used to Knock About With”.

The sound engineer at the venue was very strict on time, and all too quickly he signalled the last song, which was “Grousebeat”, a song which has a very Spectorish ‘Be My Baby’ type drum beat for the intro, and great vocals from Brian.

So, a short, but oh so sweet set from a band which we hope to see more of.

We stayed around to see the other bands that were on the bill. The next band up was a 3 piece called the Hillfields. They were not quite our cup of tea, with the vocals coming only from the lead man (no backing vocals), and their songs starting to sound just like the last, as they worked through their set. Still, pleasant enough and we did stay to listen.

The 3rd act on the bill was a punk rock group, The Dellas who took a bit of time to set up, but in the end did not sound too bad and they gave out free badges!. The audience was quite thin by this time but still seemed to appreciate this young 5 piece band.

The main act of the night came on stage at about 10.15pm. Makeokay were really were not our scene at all, so we took our cue and left.

The venue was OK – a decent sized music room with a bar manned at all times. The bar was not cheap (overt a fiver for a pint and a soft drink) oh, and don’t leave your glass with a couple of swigs of beer left in it on the bar, otherwise it gets swept up and put in the dishwasher before you realise it’s gone!. The loos were great – an odd shape, but clean and smelt fine.
No comments: