The Stables was full and just after 8pm, the lights went up on the stage to reveal Greg Varlotta on keyboards and Nils behind an electric harp. What we were treated to from that point on, for the next 2 hours and 20 minutes (no interval) was pure class.

Alongside us, in the 3rd row, were 3 brothers from Glasgow, one of which had seen the opening night to Nils’ tour, in Basingstoke and all 3 were heading up to Glasgow to see the same show the following week. It was so obvious they loved the man, and were true fans, singing along, giving standing ovations and making the most noise in the crowd! Having said that, the rest of the audience made an awful lot of noise too, especially following Nils’ terrific virtuoso guitar solos which also had the audience on their feet to show their appreciation of such a great performance.

In the 2 hours and 20 minutes, the guy was so cool he never broke a sweat, and treated us to his back catalogue, a new song in tribute to Ray Charles, and some Neil Young songs. Greg really is a multi-instrumentalist, stepping from the keyboards to play trumpet and also guitar at points during the show. Before they left the stage, our ears were really indulged with a fantastic rendition of Bruce Springsteen’s “Because the Night”.

It was hard to believe that such a full sound could emanate from just 2 men. Technology did help, with a looper to keep the guitar track going while Nils performed some incredible finger work (and while he had a sip of tea), the keyboards at one stage sounded like there was a choir humming along in the background, and during “Because the Night” we could hear a drum beat.

One of the biggest cheers of the night was when Greg tap danced a drum beat, while Nils played the guitar, and an even bigger cheer when during the encore, Nils joined him in a bit of a toe tapping session. He was really light on his feet and was a natural mover. The Beeb wondered at what point of rehearsals did the thought come to themselves “Oh, a bit of tap dancing would go down well here!!!”

After such a long show, Nils was very generous with his time and came out to meet the fans afterwards. He really did come across as a very humble man, grateful for all that he’s achieved in life.
We’ve been to the Stables many times before, but never to a performance that has not had an interval. Many in the audience found it hard to stay put for the full show... disappearing off for more beer, or a loo break (one lady went 4 times!!).

Minty hasn’t commented on the facilities for a while – the queues for the ladies were endless at the end of the night which also meant that the loos didn’t flush! They can’t cope with heavy turnover!!! 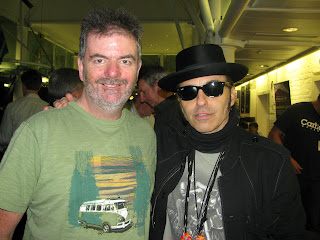 The Beeb and Nils, after the show 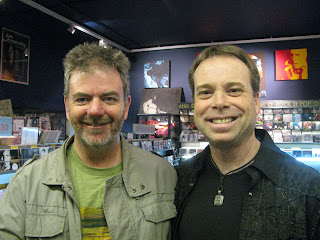 Going to see Little Shop Of Horrors”, performed by the Ruislip Operatic Society, came about from a quick corridor conversation Minty had with a work colleague who was in the production (she was playing Chiffon).

The theatre for the Saturday matinee was about two thirds full, so a credible turn out. Right on time, the lights dimmed as the drum roll began and we were treated to a fantastic performance. Unfortunately we didn’t get a programme so we can’t name the individuals, but all of the cast were in fine voice, all had slick New York accents, dressed the part and the music (as performed by the guys in the “pit”) was great.

The actual set was very well put together. “AudreyII” the blood-thirsty “star” of the show looked great too. In fact when one of the actors was snapped up and eaten whole, some of the audience may have had to change their underwear!
It was hard to believe that these guys are enthusiasts who aren’t professional actors/performers, because if you saw the show on London’s West End with RADA actors, you would be hard pushed to find the differences!

A nice touch at the end, when the cast were taking their bows, was that the guy who was “the voice” of Audrey II, and the puppeteers had their chance to take their own bows, each wearing a t-shirt with the Little Shop of Horrors logo design, and their parts printed on them!

The downside was the fact that when you booked the tickets on-line you had no choice of where you sat. All you got was an email confirming your booking, and the tickets were just given to us on arrival at the Hall.
1 comment: