GIG: Let It Be
DATE: Saturday 13th October 2012
VENUE: Prince Of Wales Theatre, Coventry Street, London
COST: £60 (plus really extortionate booking fees £17)
OUR VERDICT: Could have seen the same show for a tiny fraction of the price

The Prince of Wales Theatre, at one end of London’s Leicester Square is a really comfortable theatre. The seats are soft and have plenty of leg room compared with many other London theatres.

We were in the third row for the Saturday matinee and on either side of the stage were a large radio and large TV mocked up in 60’s style. As the theatre started to fill, the TV screens flashed up a series of Beatles questions with multiple choice answers for the audience to test their Beatles knowledge. This should have been taken as the first sign of the “cheap” production to come, as there were spelling mistakes (feaures, instead of feature for example). The questions were fairly easy to guess - Minty, not being a Beatles fan got the majority of them just through a bit of common sense! During the show, the screens were used to “broadcast” the actual performance in an authentic black and white 60’s hue, changing to colour as the later part of the decade kicked in. Rather annoyingly, the “broadcast” had about a 2 second time delay so the film did not match with what you were actually hearing.

The first half took us from the early days at The Cavern (no sign of the Germany era) through to Sgt Peppers time, and the second half from the Magical Mystical Tour to Abbey Road. Whilst the band were OK, they were supported in the second half of the show by a keyboard player to generate the majority of the instruments needed (strings, brass etc).

Be warned though, this is NOT a theatre show. It is just a straight forward tribute band trawling through a selection of the Beatles back catalogue in (near) chronological order, with changes of costumes. They may have dressed like the Beatles, albeit with very bad stick-on moustaches in the second half, but the only one who truly resembled their Beatles counterpart throughout the entire show was George Harrison. That being said we could not really see Ringo until the end when he ventured from behind the drum kit!

There was nothing wrong with the band themselves – they played and sang well enough, but considering all the audience got was a basic tribute band with no dialogue, no story, no ad-libs and not much inter-action with the audience  (limited to asking us to clap along or stand up) it was really quite appalling.

The one bit that worked well was an acoustic section that finished with George's acoustic "While My Guitar Gently Weeps" Anthology version. But even this version was a bit wasted as it changed half-way to the electric version. There was a great opportunity to really rock out here, but a rather insipid, 'going through the motions' lead, put paid to that idea!

West End prices for what you can see in a pub for ten quid is not on. It's going to catch a lot of unsuspecting tourist out we reckon. Our tickets were bought before the show started it's run. If we'd seen any of the reviews beforehand we'd definitely have skipped this one.

The real shame is that the band are fine, it's just that this is a very bad idea for a London West End theatre show. The tickets cost as much as a Paul McCartney gig!

We'd have been better going to see Jersey Boys.

Supporting Chris Isaak tonight was a guy called Paul Freemen, from Wales – just him, an acoustic guitar and harmonica on that big stage. He gave us the best part of half an hour of his own material. He also demonstrated how there are only eight notes and the same chord progression, he strummed his guitar with no variation while doing a medley mash up of about half a dozen songs which included “With Or Without You” and “Don’t Stop Believing”. Funny enough, he was right!!!

A short interval and at 9pm, Chris Isaak and his band took to the stage, Chris dressed in a light blue sequinned suit and the band in black. The whole ninety minute show was very slick, with some choreographed formation dancing (in Shadows style) thrown in. The guitar changes were seamless, and the good relationship between Chris and the band was really evident with everyone on the stage having just as much fun as the audience. When Chris addressed the audience in between songs, he was extremely charismatic, putting Wolverhampton in the same league as New York and Paris, and encouraged everyone to take photos, saying “I didn’t get all dressed up NOT to have my picture taken!”. Cameras were then released!! 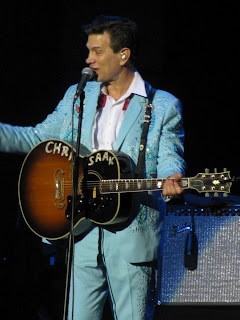 Our seats were towards the back, near the sound desk. If there is one place to sit in a hall, it’s near the sound desk as you tend to get the full benefit of the sound. Our ears were certainly spoiled. As the stage is very high at the Civic Hall, we also had quite a good view. The sound tonight was absolutely spot on. You could hear the full richness of Chris’ voice, the tinkling of the piano, and the various percussion being played alongside the usual drum beat, bass line (sometimes an upright double bass) and guitars.

At one point, Chris asked his drummer, Kenney Johnson, to “play something pretty” and then came down from the stage and into the audience, and whilst still singing, proceeded to shake hands with everyone near the aisle. We thought we’d been transported to an Elvis show! The women loved it, including the one who lunged forward from her place in the rear stalls, almost climbing over people to get to the aisle to get a photo, but alas, Chris was already on his way back to the stage before she managed it!!! “Blue Hotel” was played early on in the set, along with “Pretty Girls Don’t Cry”. “During “Dance of Love” the audience got to their feet and the guitarist, Hershel Yatovitz did a choreographed dance during the chorus. Hershel also had a stint off stage, working his way up the left side, through the gap between front and rear stalls to the middle aisle and back again, much to the thrill of the crowd.  “Wicked Game” attracted an audible sound of pleasure from the audience as it started and a huge volume of applause and whistles at the end. It did sound terrific. 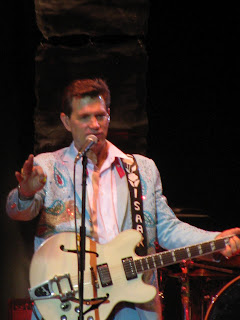 Isaak’s latest album, "Beyond the Sun"  is a Sun records tribute and once the roadies moved the piano from the back of the stage to the front left, we were treated to some fine old rock and roll and tunes from that great label, kicking off with “Ring of Fire”, and a couple of Elvis numbers, “Can’t Help Falling In Love” which showed Chris’ romantic side as he asked the audience to hold the one they love during it, and “It’s Now Or Never”. By this time we had left our seats and were in the middle aisle as close to the stage as we could get (no heavy handed security at all and everyone was good natured) and caught a fabulous rendition of “Great Balls Of Fire” with stage smoke and flames pouring out of the piano to compliment the on-fire piano playing.


When the set finished, the audience pounded the floor with their feet, demanding Isaak’s presence back on the stage and Chris re-appeared in a silver mirrored suit, dazzling us all with an encore which included a superb version of “Pretty Woman”.


As the encore finished, Chris took in the enthusiastic applause and turned his guitar around to show the message “Thanks a lot” to the crowd.


Chris Isaak is a really gracious man, not only demonstrated through his thanks to the audience, but after the show, he spared some time to meet fans gathered outside by his tour bus. He made time for everyone, signing tickets, photos and stopping to have his picture taken with anyone who asked him, including us. We had a fantastic night.

The Stables is a great venue, where no seat is a bad seat and heads don’t really get in the way of your view, and that makes it a fab place to see any entertainment act, music, comedy….

Tonight comedian Danny Bhoy was appearing as part of his “Wanderlust” tour. The venue was almost sold out, just a few seats left empty as we settled in for eighty minutes of constant laughter.

Obviously we are not going to reveal the content of his stage show as this would only spoil it for those who are yet to see the rest of the tour, but suffice to say, it was very well written, linked together, absolutely hilarious, the content striking a chord with many of the audience which made it even more funny. His show is well paced, with pauses in all the right places which allowed us to have a good laugh without missing the next gag!

Minty could listen to DannyBhoy’s voice for the rest of eternity, his soft Scottish lilt entrancing to say the least! His interaction with some of the audience (those who were a tad late and found their seats after the house lights had gone down, the girls munching on big bags of crisps and Ryan, the young lad in the front row with the Beiber hairdo) shows he is a funny guy, not sticking to a script all the time and has no hesitation in bringing the audience into the fold.

The Beeb couldn't resist letting Danny Bhoy know that he wasn't the only Scotsman in the venue, sounding very much the scary Glaswegian, which created a lot of laughter as Danny Bhoy retorted to the shout out!

Eighty minutes is a long time to thrill an audience with comedy and even longer nowadays for anyone to sit still in the audience but the time just flew past and before we knew it, Danny Bhoy was doing his wrap up, weaving everything together and leaving the stage to a rapturous applause.

A brilliant show. Go see it.