GIG: The Barracudas
DATE: Sunday 17th February 2013
VENUE: The Lexington, Kings Cross, London
COST: about £16
OUR VERDICT: Surfers were back

The Barracudas were back in London, for one night only and the Lexington was the venue. The last time they played in London (at the Dirty Water Club) Minty had to leave before they took to the stage in order to get the last tube home, so she was especially looking forward to this gig.

Former bassist David Buckley did a solo stint to warm everyone up: just him and an acoustic guitar and that went down well.

With a curfew on the live music, The Barracudas took to the stage not long after Buckley finished his set, their line up including  founding members Jeremy Gluck (vocals) and Robin Wills (guitar) with Flamin’ Groovie Chris Wilson (guitar).

The energy was amazing, the pace superfast and the middle aged men who made up the majority of the audience had the chance to re-live their youth of surf-punk-garage infusion. No stage is big enough to hold the personality of Jeremy Gluck and when he was not down on his knees or rolling about on the stage, he was weaving through the audience as he belted out Barracudas nuggets such as ”Surfers Are Back”,  “(I Wish It Could Be) 1965 Again” and “I Want My Woody Back”.

During the encore, David Buckley joined the band on stage, sharing the backing vocals.

A rare gig, and one we are glad to have caught. We will let the photos speak for themselves...... 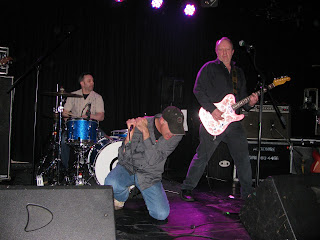