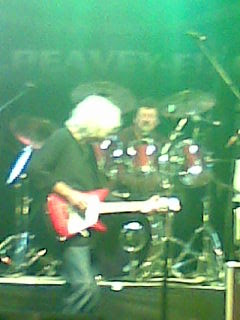 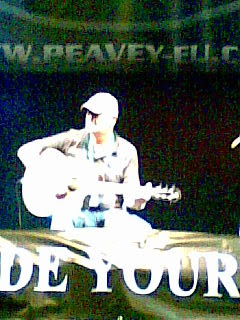 It's not often you get the chance to see an artist like Jan Akkerman sitting on a chair a few feet away from you showing you what can be done with 6 silver strings an an acoustic guitar. He was joined by Gareth Pearson, a young virtuoso from South Wales and they did an adventurous take of the Focus classic "Hocus Pocus."
We'd bumped into Albert Lee as he wandered about the venue before his set. He confirmed for Minty that he played with the Everly Brothers at her very first gig in London in the mid-80's. Spooky that. We came to this show last year and The Beeb met Russ Ballard who played at the first gig HE ever went to.
Albert Lee and Hogans Heroes are the sort of band whose musicianship skills really shine out. You can tell they have a wealth of experience behind them and it showed in this short 30 odd minute set. No wonder so many people call him up to play on their albums.

The Exhibition itself was a bit more low key than last year with big names like Gibson and Fender not putting in an appearance for some reason. We did spot one of Paul Reed Smith's £28,000 planks though. There also seemed to be a severe shortage of 12 string guitars available, although the Beeb did get his grubby little mitts on a very nice Eastwood guitar and gave it a decent road test. The Eastwood dealer was very helpful, unlike the twat on the Eko stand who asked The Beeb not to play with a plectrum! "OK," he said, as he handed the £700 potential sale back to Mr Twat and strolled off looking for any other guitar that wasn't an Eko! He would have gone for the Taylor he tried instead, but had left his £3000 in the jar at home!

One good thing about the show was being able to wander around and see great guitarists doing their thing at various stands and mingling with luthiers like Patrick James Eggle, who was the most prominant sponsor as far as we could see.

Maybe next year, the economy will pick up a bit and there will be a few more exhibitors there. It would be good to see Danelectro exhibiting, seeing as they have some juicy looking new models out soon.

So, after 5 hours of wandering around the exhibition, and taking in 2 of the live shows. we went home happy, with sore feet but with a great set of headphones for the Beeb, who can now play his guitar without attracting comment from the neighbours!!

See you next year.
No comments: