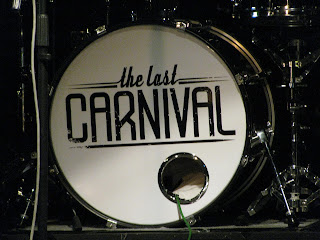 The Last Carnival is one of the best bands we’ve seen at an IPO Festival. We caught them in London earlier this year, and they are now about to embark on their own headlining UK and Ireland tour. Logistics would prevent us getting to any of the bigger venues, so that made us determined to travel to the South Coast town of Littlehampton to catch them on what we would describe as their “warm-up” gig.

But first, The Beeb had to re-visit the scene of his “When I Grow Up To Be A Man,” from almost 40 years ago. The argument of course is that this never actually happened! Having worked in the Butlins holiday camp in the nearby town of Bognor Regis, he was adamant that he had to at least find the hotel bar all the staff used.

Unable to find any details about it on the internet beforehand, he approached the perfect person for information: the old deck chair hirer on the Esplanade, who informed him of the bars new name and exact location. RESULT! It had changed of course, but the Victorian façade remained intact. With The Beeb’s memories of “Bennie And The Jets” blasting out of the juke box in 1974, we took our seat in the corner. Make that the flea infested corner. What a dump it had become: refurbished with all the character removed alongside the old fixtures and fittings.

Still, he was glad to have made the visit. Then we were off to Littlehampton for the gig, about 10 miles up the road.

We found the venue, General Henry’s, very easily, and right away we were impressed with what was obviously a great rock and roll bar. The back line provided for bands was very hi spec, with great lighting too. The woman running the bar, along with a few regulars really love their live music, and they were all very amiable.

With it being such a lovely night, we sat in the beer garden as the band did their sound check. When it neared starting time we moved inside to the bar. Song-writer and singer Russell joined us for a chat before starting. Well we say “chat,” it was actually Russell’s background and vision for the band. He sat for maybe twenty minutes regaling us with his musical tastes and hopes for the future. An amazingly loquacious speaker, it was great listening to what he had to say.

Now it was time for the band to start. They opened up with an acoustic set. Keith Richards once said, “If you want to find out how good a guitarist someone is, hand him an acoustic!” Well Justin and Russell passed that test with flying colours. We were treated to a mixture of Country Rock, Jazz, Blues and a hint of Celtic folk too!  Sounded brilliant.

After a short break it was time for the electric set and to “rock out”. With “electric” being the operative word, they instantly reminded us why we thought they were so good in London. The songs are all quite memorable, and they all have great choruses. The Last Carnival can switch from a full on rock song to a tender rock ballad seamlessly. One thing we did notice, was how well the band worked together and played a few songs one after the other, as the chord from one song began to fade, the first chord for the next song was struck and they were away again, giving us another fantastic tune. It was great to see a young band who knew their set so well and were so professional, with no awkward pauses.

The interplay between the two guitarists is a joy to watch. They just seem to be having so much fun all the time, along with the other band members. One of their songs, “California Dream” has a great tag line in it that goes “Fun, Fun, Fun.” This gives us a clue to Russell’s deep admiration of Brian Wilson’s song-writing skills.

A lot of the songs seem to have natural crowd sing-a-long choruses. This leads to Russell being able to interact with the audience with great bonhomie. One of the touchstones for the band is Bruce Springsteen, and that good natured E Street Band interaction is there throughout the set. The band have an amazing energy about them.

Another rather refreshing observation is that none of the band seem to smoke! Well we didn’t see anyone sneaking out for a ciggie, but how unusual is THAT for a “Rock” band these days? 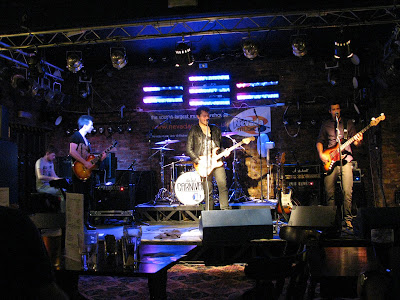 A special mention has to made about bass player Michael, and his vocal contribution to the band’s sound. He does pitch perfect harmonies with Russell all through the gig. Very understated, but really important to the overall sound.

The Last Carnival have great songs, excellent musicianship, entertaining stagecraft, great character and a stadium sound. All that’s missing at the moment is a stadium-sized audience. This hopefully will be resolved sooner, rather than later - they deserve it, and you can tell that Russell has this image in his mind when he’s on stage. We feel quite privileged to have seen them in these smaller venues before they hit the larger stages of the world.

If you get the chance to see them on the new tour, don’t let them pass you by. You’ll thank us for telling you about them. Dates are below......... but in the meantime, check out a youtube with an acoustic session covering The Killers' Mr Brightside, to whet your appetite.