The crowd were getting a tad impatient as 6 o’clock came and went and there was no sign of Bruce, however we did not have to wait too much longer before he appeared on the stage. From our seats, the big screens came in handy as we were a bit far away and the band were the size of Borrowers!

The Boss, and The River album. We thought he would play The River end to end, but instead he dipped in and out of it, all sandwiched between a fantastic 3 hour set.


Having seen his stadium gig before, we knew what to expect – he doesn't have much time for chit chat, and hardly stops for breath in between songs. He takes an occasional wander into the mosh pit area (the security detail’s nightmare!), picking out placards that request songs to the delight of the mosh crowd, and also selects someone to sing-a-long to “Waiting On A Sunny Day”. Today’s lucky participant was a wee lassie who did a great job. At one stage he also nicked a pint from someone's outstretched hand and downed it! 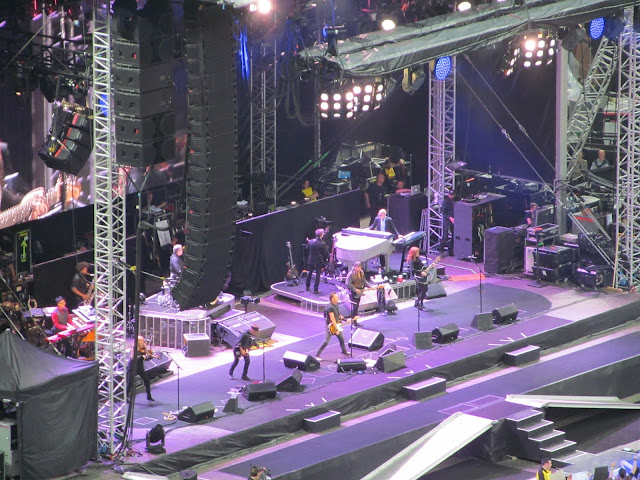 The rest of time was spent belting out his hits, album tracks and generally just enjoying the show as much as we did in the audience. The E-Street band are an amazing set of musicians who have worked with The Boss for so long, everything is intuitive, and they can do any song at a click of a finger. Nils Lofgren in particular stands out when it comes to solos and dancing around on stage.

Bruce is built for stadiums, and the crowd lap it all up and send waves of love back at him. Boy did he rock the place. The only artist on the planet we would ever consider going to a stadium to see.

Brian Wilson had already been on the UK leg of the tour for a week when we caught up with it in Manchester and stayed with it until their final show in Nottingham. Our seats ranged from the stalls (Edinburgh / Glasgow) to front row circle (Manchester, Gateshead, Liverpool) and mid circle in Nottingham.
Unfortunately, the Nottingham show was experienced by Minty from the back of the stalls, near the exit, due to a bad cough and the people on the end of the row were not willing to swap seats that would allow her to enjoy the show with the ability to duck out every now and then. The Pets Sounds piece of the Liverpool show was also seen from the sidelines for the same reason.

Brian’s band has changed a little since his last UK shows. Missing Scott Bennett and Darian Sahanaja, the keyboards were manned by Gary Griffin and ex Beach Boy Billy Hinsche. Matt Jardine (son of Al Jardine) now covers all the falsetto parts since Jeffrey Foskett departed the Brian Wilson camp for the touring Beach Boys a couple of years ago. On board for this tour were “special guests” Al Jardine, a founding member of The Beach Boys with Brian, and Blondie Chaplin who joined The Beach Boys in the 70’s and is known for his contribution to the Holland album . So how would this line up sound?

Brian shuffled onto the stage at the appointed time, his back pain obviously causing him discomfort and restricting his movement, and he spent the whole gig sitting behind a grand piano.

Although most of the vocals are handled by the band, Brian does still contribute and some nights, this contribution is more than other nights.

At times he was a little distracted, and seemed to  be shoo’ing demons from the front of his vision (or maybe he thought he still had his Pet Sounds’ fringe and was brushing it from his eyes!) but for the most part he was fully engaged and enthusiastic, roaring at the crowd with loud YEAH’s. Indeed, he warmed the crowd up with a “How loud can the girls yell?….. How loud can the guys yell?”

Are his vocals like they used to be? No, but he can still add a lot. At times he was over enthusiastic, and during one show Al Jardine seemed to admonish him, after which Brian sat like a petulant toddler who had been put on the naughty step. We did not like seeing this, as the more Brian joins in and seems happy and relaxed, the more we enjoy it. Al should have just sucked it up and realised he was not the headliner here!!!

The first half of the show opened with the acapella “Our Prayer” running into the SMiLE version of  “Heroes And Villains” before the hits factory of the early to mid 60’s singles. With Al Jardine on stage for the whole show, he took the lead on many of the songs which was no surprise given that his voice does not seem to have deteriorated over the years.

A surprise inclusion at the Manchester show was “Honkin’ Down the Highway” which was replaced with Al’s “Cottonfields” for the rest of the tour, except in Liverpool where our ears were treated to “Then I Kissed Her” instead.

Towards the end of the first set, Blondie Chaplin came onto the stage, and blasted his way through “Wild Honey”, “Funky Pretty” and “Sail On Sailor”. His guitar solos resonated around the venue, and he was the centre piece for those last 10 minutes or so, as he wandered around the stage, teasing the crowd at the front, at the side, and capturing their full attention as he rocked out. His Rolling Stones' influences shone through and we will never see "Wild Honey" in the same light again!

In Gateshead, Liverpool and Nottingham, he came on stage earlier and sang “Surfer Girl” in place of Brian.


We got to hear Brian’s collaboration with Scott Bennett, on “One Kind Of Love” from the “Love & Mercy” biographical film at three of the gigs – no nod to Scott though.

The second half was the Pet Sounds album in its entirety, The first couple of shows, Brian took time to introduce each song with a little anecdote here and there. Mid tour, Al seemed to hurry him through and by the last show, there was hardly any speaking. Another incident of Al trying to dictate the pace and “manage” Brian?? Having said that, Brian did interrupt the flow of the album, by doing a round of “Row, Row, Row, Your Boat” half way through at some of the shows.

Blondie was back on stage during this part of the show, moving around the stage, shaking the tambourine like some kind of Shaman, sending out those Good Vibes! So much soul put into a tambourine!

The encore was pretty standard, with the old favourites kicking off with “Good Vibrations” and finishing with “Fun, Fun, Fun” before we were sent home with the gentle “Love & Mercy” after which Brian heaved himself from behind the piano and shuffled to take a bow with the rest of the band before disappearing off stage.

Matt Jardine’s falsetto was not bad, but we found he was “late” on his parts, particularly when pairing with Brian. Either they had not rehearsed enough (bearing in mind though that they had been on tour all year!!) or Brian ducked out of his part early, expecting Matt to pick up the flow, as Jeff used to do like a master. Whatever the cause, there were gaps, and first words dropped all over the place. Although, as the tour went on, there was a marked improvement.

Al’s vocals were spot on, and definitely still the strongest out of all the Beach Boys former members that still sing today.

Musician wise, the band were tight. Nelson Bragg on percussion had an endless energy, and the sound was so crisp, you could hear every bell, every horn hoot, every single piece of percussion, as clear as day.

Probyn Gregory was amazing on the multi instruments he played, and even had the chance to come down to the front of the stage and into the spotlight during Pet Sounds for his trumpet piece in “Let’s Go Away For A While”.

The big drum beat throughout Pet Sounds was delivered by Mike D’Amico and the drum off on the instrumental “Pet Sounds” was terrific (except for Nottingham but more of that later).


Gary and Billy on keyboards and vibes did a sterling job and were solid replacements for Scott and Darian, even if they did look like The Pet Shop Boys!

It was great to have Bob Lizik back in the band on bass, holding that solid rhythm.

Nicky Wonder did his masterful bit of guitaring, switching to baritone for some songs and standing up to Blondie on some of the guitar solos.

Paul Von Mertens, the musical director, and Sax player / flautist / harmonica player  also delighted us with his version of “Monster Mash” which was an unusual addition to the set from Glasgow onwards.

The Nottingham gig seemed to show some tensions in the band. Up until this show, the interval had been 15 minutes max, in Nottingham it extended to around 30 minutes.
We were starting to worry a bit as Brian had seemed tired and we were not sure if something had happened.
During the interval, Mike D’Amico came back, in the darkened shadows of the stage and just sat at the drum kit, waiting. The drum off between him and Nelson on “Pet Sounds” seemed to be shorter and lacked energy. Infact, the whole show was lack lustre – the passion we had seen for the previous shows was missing, that’s for sure.


There were a few good fan meet ups, before and also after the shows. In Glasgow we partied until gone 3am with Nelson & Probyn joining us, and in Liverpool, the party was at the Band's hotel.


We do feel an opportunity was lost regarding Brian’s last album, “No Pier Pressure”. With Al and Blondie involved with that album, it would have been great for a couple of those songs to have been included on this tour. Opportunity missed for sure.

We travelled around the country for more than half of this tour, and it makes you wonder how tiring it must be to be in this band touring, not only the UK, but the whole world! They may be well looked after in plush hotels and not Travelodge's and Premier Inns, but for guys in their 70's, you have to give credit to Brian and Al in particular. It's a tough job, but we're glad they're the ones who are doing it.