We had planned to see Canadian rockers, White Cowbell Oklahoma the previous night. For some reason, (a mystery to the band as well), the venue/promoter cancelled that gig. Luckily the band managed to find a gig tonight, thanks to a friendship struck up with veteran “punk band” The Members. 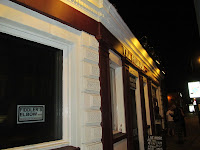 The Fiddlers Elbow was a venue unknown to us. We got there early while there was a bit of a sound-check going on. The venue is just what you would imagine a Victorian pub to be like. Apart from vinyl discs decorating the place, it looks as if it hasn't changed much over the years at all. There’s even an old piano in the corner that you feel doesn't really sit there unused.


We managed to secure a big leather sofa for the night at the back of the venue, just before we were joined by a couple of neighbours who just happened to be huge WCO fans. Another plus for the venue was an excellent air conditioning system right above us. Very welcome on a night like this.


The first band on were The Bears, a post punk band from Watford. We didn't know anything about them, but apparently they've being going, albeit with a different line up, since the heady days of punk. The first song sounded quite promising and energetic, but it didn't take long to realise most of the songs sounded just the same as each other. There was nothing wrong with the quality of the musicianship, in fact the lead guitar sounded quite impressive, it was just the one size fits all that began to grate after a while.


The Members were actually meant to be the headliners, but rather graciously handed that position to guest band White Cowbell Oklahoma. Best known for their classic hit “The Sound Of The Suburbs”, we were beginning to dread the idea of a one hit wonder punk band banging out barre chords for an hour trying to relive their younger days.


That was not what we got. Song-writer JC Carroll, looking like a French onion seller who had left his bike outside, turned out to be a witty raconteur leading a very fine band indeed. Bass player Chris Payne proved himself to be an excellent singer too. The quality of the vocals raised the bar considerably from the previous band. With a genuine punk rock legend in the shape of Rat Scabies from The Damned on drums this turned out to be quite a jaw-dropping experience.

There were a few people in the audience that clearly knew The Members songs as they sang along with them. The songs themselves actually had depth to them. There wasn't the three chord punk thrash we expected. Clever lyrics and few forays into a Ska/Reggae trip made the set very varied.

﻿ ﻿ Rat Scabies was a powerhouse of a drummer. Not just in a rock style, he was very subtle when it came to the reggae stuff. He was a genuine surprise to us. One of the highlights was their reggae version of Kraftwerk’s “The Model.” A clever twist to a great song. The band also played some new songs that make the new album well worth investigating.

Of course the real highlight of the night had to be “The Sounds Of The Suburbs.” It may be the mill stone round JC’s neck at times, but this is a GENUINE classic.

This definitely wasn’t a "relive the Seventies" band. They are still fresh and vibrant live, as the new songs proved. The only downside to the gig was seeing an original “punk rocker” in the audience, who must have been closer to 60 than 50, wandering about wearing a Swastika t shirt. It may be that “Punk’s Not Dead”, but that was just sad looking.


We got what we expected from White Cowbell Oklahoma. A rocking, raucous set of fast paced and LOUD head banging gems. With three guitarists including new boy Nicolas Ladouceur, playing in a plectrumless style of Jeff Beck, we were given a lesson in rock and roll.

﻿﻿ ﻿﻿ While Joan Smith gave the vocals an extra quality, most of the vocal duties came from the preacher-like Clem C Clemson. At one point he had the whole place singing back to him in a Gospel fashion. 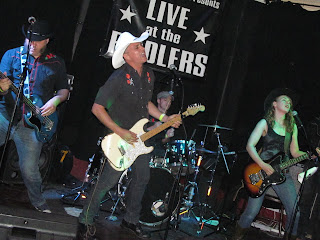 With a great drum and bass duo of Gianmarco Fiacconi and South Pawl Jones respectively holding everything together, Fraser Fulwell on the infamous cowbell looked as if he was ready for things to kick off at any moment.

This is a band that plays to huge numbers all over Europe, as well as their native Canada, so it was a total delight to see them in such an intimate setting. So intimate in fact, that Fraser had no room to use his chainsaw or grinder…for safety reasons! 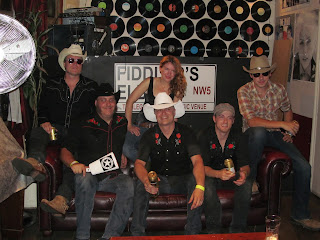