It was a night out at the Concorde2 in Brighton for us as we wanted to be at the launch party for their first album, “The Call of ‘56”, and first gig of a headlining tour for the fantastic The Last Carnival. 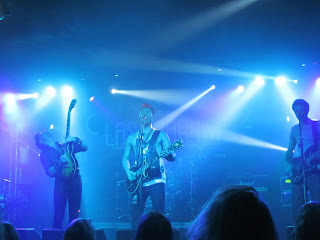 A stand out band from the London IPO last year, it’s really quite astonishing how much they’ve progressed since The Bull and Gate. We did see them in a pub in Littlehampton last year too, where they did an acoustic set before they rocked out. 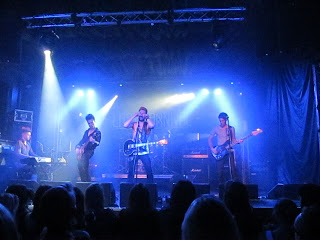 But for tonight’s gig it was a full on, in your face stadium rock show opening. A stunning light show that would have had any epileptics in the audience on red alert, signalled the band’s intent that they really meant business.

We had a couple of their previous EPs, that included the wonderful Cadillac, but even they couldn’t prepare us for just how good the songs are on this debut album.

The title track, “The Call Of ‘56” just begs for a Glastonbury sized audience to sing along with. In saying that, most of their songs are full of catchy sing-a-long riffs throughout. Every song is a gem.

Singer and songwriter Russell has an energy and passion in everything he sings. He’s a great guitarist himself, but his on stage duels with lead guitarist Justin are a joy to watch. Justin has perfected his rock God poses perfectly. The band don’t just SOUND great, they LOOK great too. This is borne out by the hordes of screaming girls at the barrier in front of the stage.


The very well-spoken Kieran on keyboards, we’ve noticed before, smiles his way through every gig. He just seems to love everything that’s going on in front of him.

So many of the songs have great big choruses, and there are filled out brilliantly by Kieran and bass player Michael. Michael, an Andy Murray look-a-like.......only with smiles, has such a great voice too. He really adds a great deal to the vocal blend.

Apart from the all-out rockers, the band can stray into classic REO Speed-foreigner type Power Ballads too. The Neil Schon like screaming guitars make this no bad thing though. It certainly adds extra colours to the set.

“Top Of The Hill” must be the definitive blueprint for anyone wanting to write a crowd pleaser. The whole place joined in with this call and the response was diamond.

This was such a good gig, and although it’s astonishing how far they’ve grown in the space of a year, it really shouldn’t be a surprise.

They’ve got a great fan base, and not only that, Russell had a well thought out vision and plan for this band when we spoke to him at the last gig. It’s all falling into place for them right now.

When you see bands like The Killers and Kings Of Leon making in into stadiums, then you realise with songs like the ones The Last Carnival have, all that’s needed now is that little bit of luck. But for the time being they are certainly making their own luck right now. It’s only a matter of time before they make the big time.
See our other reviews:
Bull & Gate, May 2012
Littlehampton,  Aug 2012 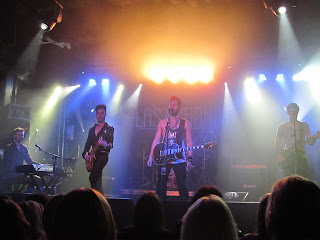 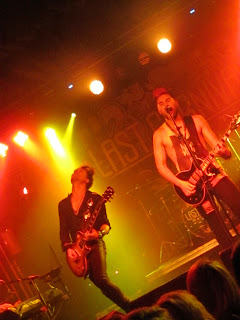 After seeing how good The Katmen were in Liverpool back in May, we didn’t want to miss them when they played the Borderline in London.


The Borderline is a lovely little basement music venue, tucked away behind the top end of Oxford Street and Tottenham Court Road station. A stepped area in front of the sound desk means that you can see above heads and have a pretty much unrestricted view if you stand towards the back, away from the mosh pit (we did).  With Bud on tap, it’s a good bar too!


The support tonight came from a young five piece called The Caezars. "Vintage styled Rock'n'Roll that Tarantino would be proud of," said Time Out. And they’re not far wrong. Seasoned giggers already, having played at Glastonbury and toured with Imelda May and Brian Setzer, they were very slick, with a singer that was very Gene Vincent influenced,  and had a number of good songs in their set. All that was missing was some backing vocals.

The Katmen came on stage, and kicked off with the old Yardbirds hit, “Over Under Sideways Down.” Whilst the venue has air-conditioning, the coolers were at the back and over the bar area, away from the stage area which meant, with the throng of the crowd and the lights on stage, it didn’t take long to heat up and after a couple of songs, Slim Jim Phantom’s leather jacket came off, to reveal his red waistcoat and scarf which had him camouflaged by the gaudy, similar coloured curtain behind him! Despite the heat, Slim hardly broke sweat though. Cool Kat for sure!

This was pretty much the same show as we saw in Liverpool, not surprising as they have been on the road and gigging non-stop for ages. Darrel’s appreciation of Eddie Cochran was displayed by a storming version of “Nervous Breakdown.”  “The Train Kept A Rollin” by The Johnny Burnette Trio was another great cover.

Slim Jim almost brought the house down again when he sang the old Stray Cats song “Rock This Town.” Al Gare on bass seemed to be amused by just how good the crowd was during this one. The Rockabilly girls dancing in front of the stage really lapped this one up. Another great cover included in the set was a rocking version of the Bruce Springsteen’s “I’m On Fire”. Brilliant stuff.

Speaking of Al…his bass playing really stood out tonight. Especially when he played the electric bass for a while. You didn’t just hear him…you felt him! The sound was awesome.

Highlight of the band’s own recordings were “Everytime I See You It Makes Me Smile,” and “So Far From You.” The latter provided the guitar solo of the night too. Darrel on top form once again.

For the encore we were treated to a modern day Rockabilly classic, “We Need Elvis Back” before they finished with another Johnny Burnett cover to bring the show to a close. The crowd did whistle, yell and stomp their feet for a second encore but sadly, the gig was over.

There are still a few gigs left to do on this tour. So if they’re playing near you they make for a great night of music, so get along to one. One gig we can’t make is at one of our favourite pubs in Brighton, The Prince Albert. That will be some show. Don’t miss it if you’re in the area!