THE STABLES, Milton Keynes (8th March)
A Q&A show in London's Leicester Square Theatre in January had certainly whetted our appetite for the real thing. Now it was time for the first live gig of Russ’s solo career in 40 years......

Nervous? Well, that would be a “Yes” according to Russ when he walked out onto the stage at The Stables in Milton Keynes on the Tuesday night. After a bit of banter, it was straight into “Rene Didn’t Do It.” It was a joy to finally hear an album track, live!

His band, Bob Henrit on drums, Stu Ross on bass, Steve Smith on keyboard and multi-instrumentalist Chris Winter on keyboards, guitar, sax and harmonica had a good time too. First night nerves quickly melted away and the show was a good 'un.

The set list was interspersed with anecdotes about the various songs Russ has  written and produced throughout his career. The medley of “So You Win Again,” “I Know There's Something Going On” and “New York Groove” epitomised the diverse range of hits Russ has written over the years. Russ' voice soared during his rendition of "I Don't Believe in Miracles" which got a rapturous reaction from the crowd and the set finished with a bit of boogie woogie keyboard, with "Little Queenie".


The show may not have been a total sell-out, but the audience was very appreciative. When the gig was over, there was a bit of after show meeting up in the foyer. It was clear that some old friends were seeing each other for the first time in a while, and for us it was the chance to make new ones, including Sue who is the editor of Russ' Newsletter.

Russ was very generous with his time afterwards, chatting to everyone, and having photos taken with anyone who asked.


THE FLOWERPOT, Derby (12th March)
A few days later we made it to Derby for the next gig, a SATURDAY, and a chance to meet some friends of our own we hadn’t seen for years. Already it was going to be a great night.
What a difference The Flowerpot was to The Stables. It was a real rock and roll pub venue, a few seats around the edge but mainly unreserved standing. The more than decent sized crowd was crammed at the front of the stage ready for action.

The band came on and it was a blistering show right from the start. The set was  unchanged from The Stables gig, but there was some ad lib stuff thrown in, such as "Concrete & Clay". The band were certainly kept on their toes.

All of the songs went down really well, and a great sing along with “God Gave Rock and Roll To You” was a highlight. The sound was very good (Russ and the venue, not necessarily the crowd singing along!!), and it was great to be right up there, and close to the stage. We think Russ felt the warmth of the crowd too and he really seemed to enjoy it.

Once again, Russ was out chatting with everyone after the show, and our friends were delighted to have some memorabilia signed. The merchandise available was plentiful, and the signed set list was a real bargain to be had at only £1.

As if the gig wasn’t good enough, we had fortuitously and unknowingly booked into the same hotel as the band! We were kindly invited to join them all for a drink and a chat once we got back there. The world became that little bit smaller when I found out keyboard player Steve Smith and I had a mutual friend. Russ was a bit of a raconteur and had a few good stories to tell. A fantastic end to the night.


THE ROBIN 2, Bilston (13th March)
After spending an afternoon shopping in Derby, we made our way to Wolverhampton, booked into the next hotel and headed straight out for something to eat. Bilston does not open on a Sunday by the way, but we eventually found a Wetherspoon pub!!!

Before the show, we had a couple of drinks in Woodies, next door to the venue. Dedicated to the wonderful local hero Roy Wood, and memorabilia all around, with the soft furnishings, this bar was like sitting in someone’s front room. You get into the actual gig through the back of the pub too! 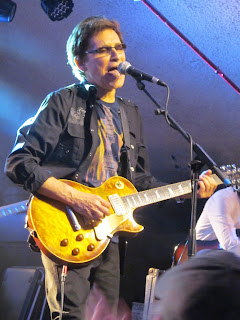 The Robin 2 was cavernous compared to the Flowerpot. This was the biggest audience so far. Beside meeting up again with Sue, we spent some time in the company of a few head-banging stragglers who had made their way back from Friday's Hard Rock Hell gig in Wales. We thought that was actually an outdoor gig, otherwise we might have been tempted to go there too!

Each gig so far has had something memorable about it…beside the music. This time being a bloke in a Kiss T-shirt at the front of the stage who was able to play note for note on his air guitar, everything that Russ played! I have no doubt that Russ’s attention was on this guy when they struck up “God Gave Rock & Roll" and he forgot the words!!  For all the times he must have played this, he did at least have good grace to laugh about that happening.

It was terrific to see a venue this size being so supportive of Russ. This is a great place to see any band. 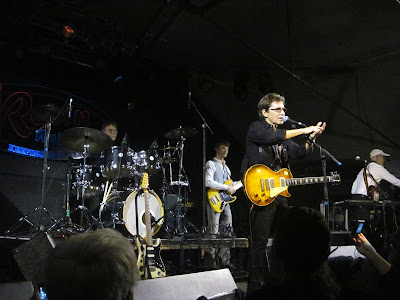 NELL’S JAZZ and BLUES CLUB, Kensington (18th March)
The last night of the tour, and a bit closer to home for us, London.
Meandering our way through Kensington to the gig, we bumped into Stu and Steve from the band. After a wee chat with them, we got to the club, and managed to blag a table, right front centre of the stage. Result! The venue itself was really nice, a bit of a modern take on Ronnie Scotts, and the stage area was quite spacious.

This time we met Irene from Amsterdam, who joined us for most of the night. The next table to us had a group of Norwegian guys who’d come over for the weekend. They certainly were enjoying themselves too.

Once again there appeared to be a lot of friends meeting up around about us. It’s been a bonus doing these gigs and seeing such friendliness everywhere. Minty came back from the toilet laughing at one point, having heard a group of young "twenty somethings" talking about Russ and wishing they were twenty years older!!!!

Another highlight for us has been hearing the new song “Time Machine” at every gig. Surprisingly, this is the only song he has played from his new album (only available on download) and it really does stand up strongly against anything else Russ has written over the years. Tonight “Voices” was given the audience participation treatment. The old Chuck Berry number “Little Queenie” has been the finishing song on the tour, and tonight’s version was a real belter. A great way to finish the gig. 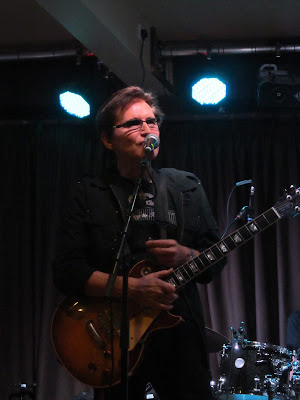 But the night wasn’t over just yet. Boyhood dreams came true when The Beeb finally managed to get his hands on Russ’s iconic Fender, yes…the one with the holes in it, and have the photos to prove it! Having had posters of this on his bedroom wall when he was a teenager, he was in seventh heaven.

These gigs have been such a wonderful experience for both of us. Each gig had its own wee vibe going, and all of them were special in their own way. We really have to thank Russ, Chris, Stu, Steve and of course, the evergreen Bob for all the music and generosity of their time.

A special thanks to Peter Ross from UMU Music, who was very accommodating and helpful too throughout the whole tour.


Well the 40-year wait for The Beeb was well worth it  And if Russ’s next tour is when he’s 110, at least we’ll have 40 years of happy memories to keep us going till then!