﻿﻿ ﻿﻿ The Basement of Leicester Square Theatre is an intimate setting, where Mari Wilson has been staging her “Love Thing” – a one woman show telling the story of Elle, one time backing singer with Duran Duran. Little over an hour is a short time to tell the story from Elle’s childhood through those heydays of the ‘80’s through to now but Mari does it well, picking each poignant event in Elle’s life, and interspersing the story-telling with some great songs, with her musical partner Adrian York providing the accompaniment on the piano.


It kicks off with the child Elle singing into her orange hairbrush, wearing her Mum’s sling-backs to give her a more “grown up” air, progressing to meeting her “Stage Door Lover” Sean, whilst appearing as backing singer for Duran Duran, then relating Elle’s life through from being “The IT Girl” to the breakdown of her singing career as she gives up opportunities to be with Sean, the birth of Daisy and then the subsequent breakdown of her marriage as she finds out Sean has cheated on her and “time passes slowly when someone is breaking your heart”, after which Adrian tinkles the ivories while Mari disappears back stage, emerging for the next part of the show in a glitzy top and then begins to tell us about the latter part of Elle’s life.
The 2nd half of the show begins with “The Love Thing”, Elle is on the dating game (rather disastrously) and realises she has begun the ageing process. Then after meeting a new man, it dawns on her that he is “Moving In” – but not for long. On her own once more, Elle has started to sing again and now has her own dressing room and then Mari sings the grand finale “I’m Getting There”, a very powerful song, sung with a lot of emotion. It had everyone on their feet at the end – a fab show, so well put together, with highs and lows, laughter and sadness.
The set is simple...... a table, a stool, the piano Adrian York plays and a few props – the orange hairbrush, and a range of phones, including the rather clunky old 80’s mobile phone that cleverly take us through the years as they change throughout the play.
The art of being a great songwriter is having the ability to make a connection with your song to an audience. Having an emotional spark that touches others. Mari does this so well with her songs. You don’t have to be a cheated woman to feel the optimism of a great song like “Getting There.”


We feel all kinds of emotions on this journey with Elle, immersed with songs that are happy, sad, funny, poignant and a lullaby that only a loving mother could have written.


This play/musical drama has a lot going for it. The possibilities are endless. Not only does it work live, but someone with sense and the know-how should make this a TV programme or a movie. It’s that good.

The gang meet Mari and Adrian after the show 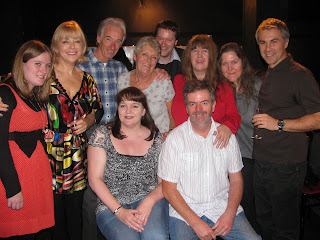