We first met this band at the annual Liverpool International Pop Overthrow Festival a good many moons ago and after seeing them for a couple of successive years, we became friends and take the chance when we can, to see them play outside the IPO universe.

A 4 piece of drums, keyboard, guitar (more often than not, a jangly 12 string) and bass, Spygenius are a mix of powerpop, surf, pysch, jangle pop and a little nod to ska with a good dose of all round fun thrown in. They have a good back catalogue of original material and are just about to launch their next CD, all recorded during the Covid lockdown on phones and laptops before being expertly spliced together to give what is an album of pretty fine versions of an eclectic mix of covers.

Tonight's gig was a solid straight 2 hours without a break, which just flew by and included older material alongside their more recent songs. A strength of this band is that all four members sing so the backing for the lead vocal is very strong. The older songs sounded really great so we will be digging those CDs out again to give them another listen. The sound was really good to the extent that we could actually hear all of the words, rather then them being buried in the overall mix, as tends to happen at the IPO venues. And it is important to hear the words being sung by this band, as the lyrics are invariably very clever and intellectual. Then you get the catchy "Pineapple Drive" which is basically infectious fun which you can't help tapping your feet to and bopping in your seat.

A couple of stand out songs tonight were "Cafe Emery Hill" which would sit very comfortably on a Ray Davies/Kinks record and "Get Over Yourself". And did we get "Dumb Angels" at the end of one song? That 4 piece vocal harmony was lovely.

Mid way through the set, a sombre but touching tone befell the band as they did a song recorded by The Jazz Butcher, an 80's indie band headed by Pat Fish who recently passed away, and was known to the band. A fitting tribute.

What we know as "The Shouty Song" is a firm favourite of ours, giving the bass player the chance to offload the bass and become a punk star for a couple of minutes. Pure brilliant and another song with great lyrics and was a powerful way to end the night.

The Oval boasts of being passionate about live music and they certainly do have a full schedule. Tonight the place was as full as it could be considering that the pub is still not allowing standing and we were glad we reserved a table. There was a mix of locals and friends of the band, resulting in a great atmosphere and appreciative audience.

We are so glad that live music is back. 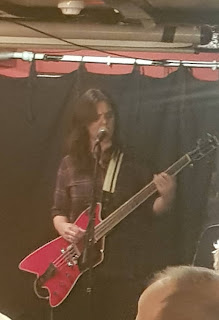 And we are back...... our first big gig since lock down restrictions eased. Postponed from what would have been Sir Cliff's 80th birthday last year, we were really looking forward to this gig.

Seated up in the Gods (Rausing Circle), we had an unrestricted view where the sound was absolutely fantastic as we were pretty much level with the huge sound system.

The set began with "Wired For Sound" and during the best part of 2 hours, we got a bit from just about every one of the 7 decades he has been recording. With his vast back catalogue, how do you choose a set? There is so much choice. What do you leave out? He got around this a little bit by doing a medley of shortened versions of his oldies, which included the audience singing back with The Young One's version of "Living Doll", and a medley of "Carrie" and "Devil Woman".

He looked good, he sounded great and gave us a really enjoyable show.

The highlight was of course, the never aging "Miss You Nights" - always guaranteed to bring a tear to the eye.

It was another "oldie" to tick off, although the way Cliff was moving and sounding, he is not going to be leaving us anytime soon and we might just get the opportunity to see him again. During the show, Cliff gave a nod to Bruce Welch who was in one of the boxes watching the show.