Billed as "Jimmy Webb - Still On the Line: The Glen Campbell Years", this show epitomised the multi-decade friendship Jimmy and Glen have treasured. There was of course a tinge of sadness, knowing that Jimmy was paying tribute to his best friend who no longer actually remembers him, being in the last stages of dementia.

Jimmy is a fantastic raconteur, a prolific song writer and he had years of happy memories to pull from and share with us. And that is exactly what he did.

Seated at a Grand Piano, the time flew past as Jimmy chatted to us (and the rest of the audience!), interspersed with song, picture shows, video and even singing along with Glen on the video.  The whole auditorium sat enthralled and were genuinely entertained as Jimmy shared his childhood years, his move away from home, the time he first met Glen....... through to the numerous collaborations with Glen. We could have sat there and listened for hours more.

He included the expected songs, such as "Witchita Lineman" and "When I get To Phoenix" but also spoke a lot about his time writing for The Fifth Dimension.

This show was not "off the cuff" like previous shows we have seen, as Jimmy's story telling had to match the flow of the photos and video in the backdrop. But even though this was "scripted" it still felt like Jimmy was in your sitting room, just sharing adhoc memories and bursting into song.

After the show, Jimmy gave a lot of his time to meet the audience who formed a long line through the lobby area. Although the queue was long and it was late, Jimmy never rushed anyone. Happy to sign his CDs, memorabilia, pose for photos, you really could not get a more generous star. 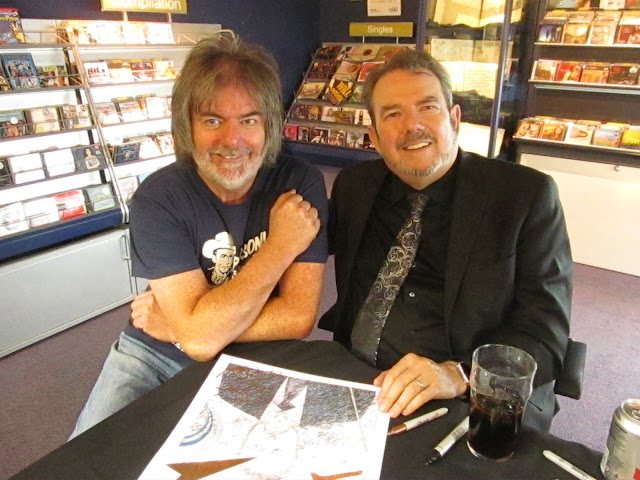 Seeing Jimmy Webb perform is as pleasure any time, and tonight was a bit special given the nature of the show. We felt the standing ovation at the end, which seemed to humble Jimmy, was not just for him but for Glen too.

Having had the week on holiday in The Cotswolds, we ended our break taking a bit of a detour and an overnight stop in Lewes near the South Coast town of  Brighton. The reason? So we could grab the chance to catch Thee Sherbert Peardrop Explosion playing at Lewes Con Club.

Made up of  members from local Brighton bands, this four piece have opened for legendary Psych band, The Sonics in the not so distant past. They dress the part, they sound the part and they played a blistering set of Psych covers which included (of course) The Sonics, The Standells, and included a brilliant version of Link Wray's "Rumble".
You do get the feeling that this band are playing because they love playing, and the songs they so perfectly cover are actually personal favourites. That helps give a great atmosphere as they are enjoying things as much as their audience.

If you ever have the chance to see this band, then go see them.

Did we tell you they opened for The Sonics?

We visited a couple of the guitar and book shops whilst we were in the area, and it made a pleasant change for us to manage some quality time with a couple of the guys from the band next day. Drinking beer with good friends, talking guitars in Brighton. A very pleasant way to spend some time.
No comments:


Brian at the beach. What's not to like? Well, Southend on Sea at least. A one off gig after the UK tour a few months ago. And an excuse for lots of friends to get together again, and enjoy a bit of seaside to boot.

We spent a few hours down on the promenade, and bumped into some familiar faces. This turned out to be a gig were we not only met old friends, including some surprise ones, but made a few new ones too. There was a meal arranged beforehand, and of course Probyn and Nelson turned up there.

The venue itself was a bit odd with the stalls being standing only. Standing at a Brian Wilson gig is a strange sight for us. Thankfully we managed to get tickets for seats upstairs.

Brian came on to a great ovation and we settled down for another enjoyable gig. It doesn't matter how many times we've seen and heard this show, it's always a joy. There was a moment when playing the Pet Sounds album, Brian stopped the song, and called on his assistant to say he had heartburn. After a quick tablet, Brian carried on. It took him a while to get back in his stride, but by the end of the night the place was rocking again.

The format of the show was different to what we had experienced in May - this was a straight single set show, with no interval which meant the stage time overall was much shorter. We still got some of the old hits on either side of "Pet Sounds", and the chance to see Al Jardine and Blondie Chaplin in the limelight.

The night was ended off by a group of us finding a cafe/bar serving drink till late at night. The barman was very enthusiastic about music. And while we were enjoying Rockabilly music, supping our drinks outside on a lovely evening, I'm not too sure the local residents were.