Paul Bevoir does not do many gigs now, so the prospect of seeing his band The Family Way, live was something not to be missed. Another reason not to miss this gig was that The Beeb had been asked to augment the sound with some backing vocals.

The Slaughtered Lamb is quite a nice venue. Heaving with the Friday London workers crowd upstairs, the pub has a gig room downstairs. The turn out for this gig was brilliant, with the room being crammed full!

The Family Way, who have emerged from 80's band, The Jetset, deliver some toe tapping, catchy little pop numbers with some superb harmony and melody.

The set up was keyboards, Rickenbacker guitar, solid drums and bass, acoustic guitar and a guest appearances from a tambourine and banjo, with four members of band contributing to the vocals plus The Beeb providing extra backing and a bit of percussion. All of these ingredients mixed together sounded fantastic.


One touching moment of the gig was the performance of "When Matilda Flies", a song written by Paul for his daughter who had never seen her Dad perform live before. It was great to hear a new song from Paul too, "How Many Days In Forever." The Beeb took on guitar duties for this uplifting ditty, whilst Paul proved that not all banjos deserve the criticism they get.

We left with a warm glow running through us, on what was a cold December winter's night.

The Endless Summer gatherings are really great and the annual Christmas Party is something special for us as we get to see that superb UK Surf Punk band The Surfin' Lungs play.

First up were The Squadron Leaders, a local instrumental group we have seen playing a few times before. It was good to see these play again, and with a permanent bass player too. They dressed up for Christmas with tinsel "flight command" moustaches!


The middle band was another local troupe - The Space Agency. Another instrumental band, but with a more distinct surf sound. The drummer doubled up on percussion at times, by using a maraca as a drum stick! We were getting warmed up now.


The headline act was the Surfin' Lungs, who really rocked the place up.

Their fast paced set included songs from their recent album, "Surf factor 8", loads of old favourites form their vast back catalogue and a few Christmas tunes too, including "Run Rudolph Run" and a great punky version of "Frosty The Snowman".

The crowd were dancing all the way through.


Lead singer Chris was suffering from flu but hats off, he persevered and stayed the course for the whole set despite ending up with no voice afterwards. We love this band.


The Kast Off Kinks are a tribute outfit to that iconic London 60's Mod band, the Kinks. Boasting members of the Kinks in their line up over the years and with the ever present Mick Avery behind the drum kit tonight, they can claim a good pedigree. 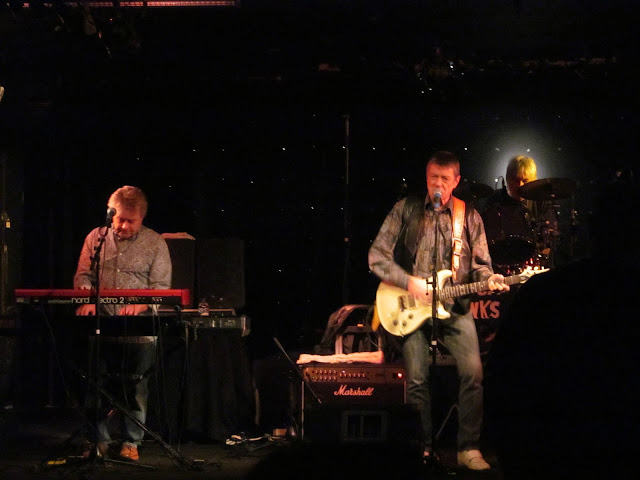 Do they sound like Ray and Dave Davies? No. Do they try to capture the sound of the swinging sixties in London? Yes. For a fun night out, they tick the boxes.

There was a decent crowd in The Con Club, which left standing room only. It did not take long for the audience to start dancing either and it was a quite enjoyable night. The sound was great.


The set was a "best of", as you would expect. Mick Avery emerged from his drum kit in the second half, donned a very loud "cartoon" jacket, and gave us a great version of "Dedicated Follower of Fashion".

All the hits were there, including "You Really Got Me", "Sunny Afternoon", "Lola", "Waterloo Sunset", "Apeman", and "Come Dancing." A show like this is a reminder of just what a great song-writer Ray Davies is.

Tonight's band had Dave Clarke doing a fine job on guitar and most of the vocals. Ian Gibbons tinkled the ivories and on bass was John Dalton.

Any excuse to get to the Brighton area is always welcomed, and this gig certainly made it well worthwhile.