We were in Glasgow for a weekend with no plans regarding what we would do gig wise. After a browse through what was happening we had a choice between an Alex Harvey tribute band in The Scotia, four bands in the 13th Note bar or a conglomerate of musicians in Bloc bar.

Bloc bar won out. For the past X amount of weeks a group of musicians have got together to learn two songs a week with the intention of doing a gig in the bar. After a month they have 8 to 10 songs that they will do a gig with. The quirkier the instruments the better.

So we had a stand up bass, ukuleles, violins, glockenspiel, guitars, keyboards and various other instruments taking part in the proceedings. 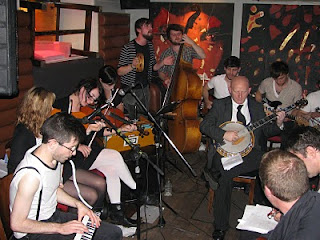 We happened to nip in earlier in the day to find out tonight was the culmination of the past few weeks rehearsing.

The evening started when all the musicians came back from the various pubs they’d been to during the day and done an A cappella song outside the bar, that sounded great.

First song of the night on the official gig was a Surfjam Stevens song. We’re not well acquainted with the Jamster, but the passion and verve in this performance was enough to make us want to see what he was all about.
Then came Live And Let Die, introduced as a Guns and Roses number. Not sure if that was irony or an age thing. Didn’t they know it was a McCartney song?

The set was filled with gems like the Fleet Foxes “Mykonos,” Talking Heads “Road To Nowhere” and even Fleetwood Mac’s “The Chain.” 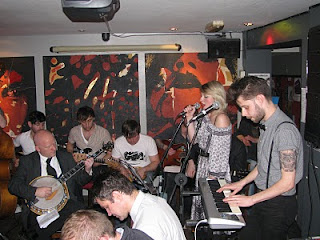 The pub itself was jam packed, no doubt by a lot of friends of the musicians, but the thing was, it was a great gig. There was a lot of enthusiasm about the whole venture and it really was a great idea that worked brilliantly.

A notice went up on the wall for anyone who wants to take part in the next venture, and if it hadn’t been 400 miles from Hemel Hempstead The Beeb would have signed up on the spot! 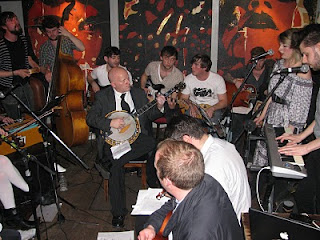 It’s been a good few years since The Beeb had a drink in The Griffin pub in Glasgow. So to help relive his youth we decided to pop in and see what was on offer gig wise this Saturday night.

The pub hasn’t changed much in the intervening years. It has a big horseshoe bar with a room in the back for the live music.

First up tonight was a guy called Kenny Macdonald, who, for some reason, calls himself “Les Johnson and Me.”

He has a very distinctive voice that lent itself well to his lost highway type of songs. His voice and demeanour was a mixture of Johnny Cash and Jake Thakery if you can imagine it. He had a Taylor guitar that added a bit of quality to the sound.

The sound though was having a constant battle against the background babbling that became really annoying. Why do people pay good money to hear a performer, and then gab all the way through the act? If it had been The Luminaire in London they’d have been booted out onto the street.
Despite that, he put on a well received set.

Next up was the turn advertised with the word “jangle” in the blurb. Aldo Cruickshank came on stage with his band which also included the woman who had actually been doing most of the annoying babbling earlier, and even thanked Les Johnson & Me for opening the night (a bit of a cheek we thought, considering they never sat quietly to listen to his set)!!

The same woman then managed to blot her copy book further before they even got started. Before anyone had said”Hello, good evening or welcome,” she burned Aldo’s ear with a mercenary “Tell them about the CD!” Now everyone has a duty to ply their wares, but not before a single silver string has been plucked!

With a line up of keyboard, a tabla drum and acoustic guitar it was difficult to find the previously advertised “jangly country pop” in the music. Despite that, and to our annoyance, the woman added to the harmonies with the two guys quite well at times. There was a song called “Beautiful” that had three falsettos that became just a bit too much though. There was no doubting their enjoyment of playing the set either.

Aldo came across as a bit like John Sebastian at times with some of the lines in his songs. An enjoyable enough set, despite his starting off as a bit like a hen-pecked husband!
No comments: