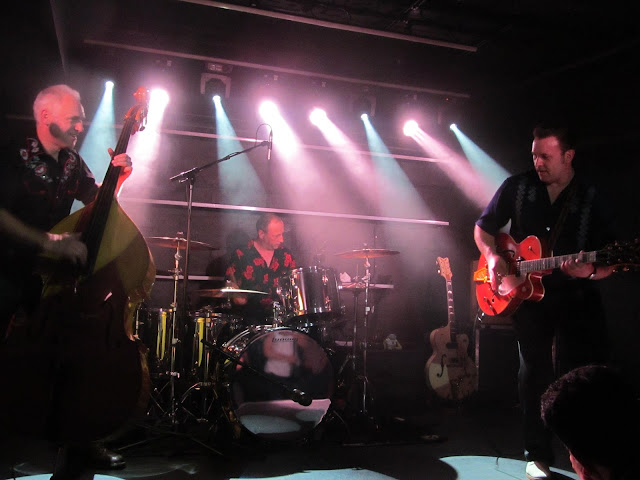 It was a basic set up - a drum kit, stand up double bass and Darrel Higham with his rockabilly quiff and guitar to give us just over an hour of some great rockabilly tunes. No need for fancy stage sets or guitar pedals. This is pure raw rockabilly music. 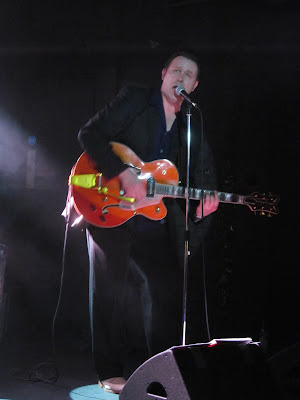 The influence of Hank Williams and Eddie Cochran is very transparent in Darrell's solo material. His set tonight had a few covers included but it centred mainly on his latest two album releases, "Hell's Hotel" and "One For The Road" which was great as we had not heard anything from the "One For The Road" album before.

The songs are short, punchy, with that simple drum beat, bass slapping and guitar twang that is synonomous with the rockabilly beat, but each individual enough to avoid sounding like the same song over and over again.

We really enjoyed this gig. Not only for the music but for the intimate setting too as The Borderline is a small venue.

After the gig, Darrel was extremely generous with his time to say hello to people, have photos taken and sell his CD's which seemed to be flying off the merch table. Would not hesitate to see him play again. 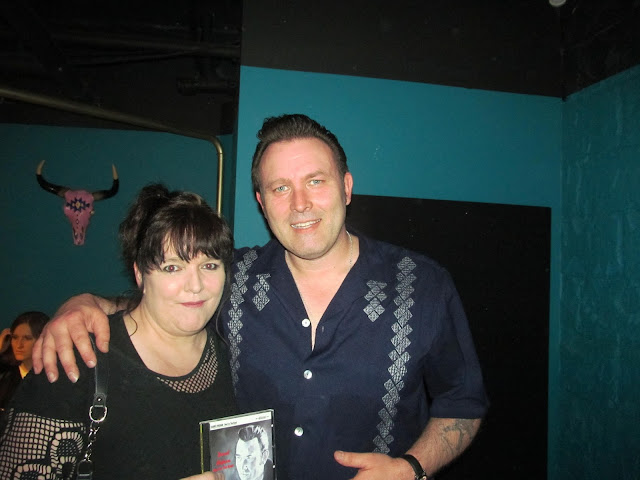 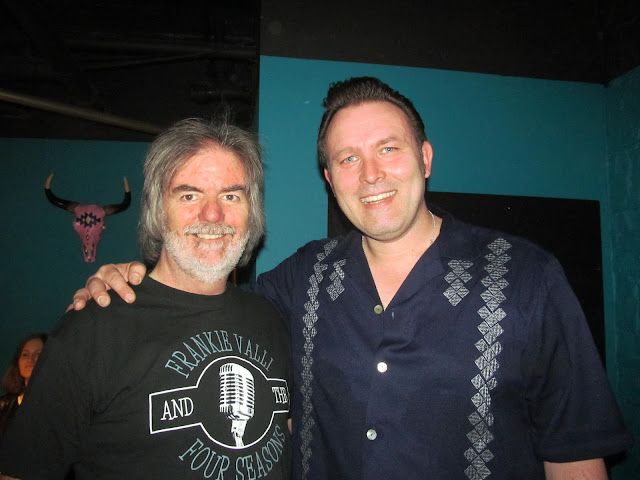 Video of "And The Angels Cried"


"Said he was giving me a Taffeta dress.... that's Just What I Always Wanted" - the opening lyrics from what is one of Minty's favourite songs and the theme of the gig which celebrated the 25th Anniversary of the release of this iconic 80's song.

The gig was a total sell out and no wonder, as Mari pulled out all the stops, with a full band and backing singers to support her, including original Wilsation Saxophonist Stewart Curtis, and James Nesbitt who has been the staple guitarist in her solo shows for a few years now. The big band really made for a great party atmosphere as Mari lead us through what has been a brilliant musical career .

Her first album "Showpeople" was really celebrated as well as her most recent release "Pop Deluxe", a covers tribute to all those fantastic 60's girls who ruled the charts, such as Dusty Springfield, Cilla Black and Petula Clark.

She can belt out those classics when she needs to and then she can sit perched on a stool and deliver such a soft, slowed down version of "24 Hours From Tulsa" which leaves you with the hairs standing on the back of your neck, and too scared to breath lest the sound break the hush that fell over the mesmerised audience. The reaction to "24 Hours From Tulsa" was amazing.

The crowd were delighted when long time friend of Mari's, Marc Almond joined her on stage to duet on two classic Dusty Springfield songs, "I Close My Eyes & Count To Ten" and "I Just Don't Know What To Do With Myself".

She has a great sense of humour and a cheeky laugh and kept the audience entertained in between songs, not that there was much of a break between songs mind you, as the whole set flowed so smoothly and included 4 costume changes. Mari has the knack of finding great outfits for her gigs. Starting out in a 60's style sequinned mini dress, she also wowed us with an orange and red chiffon combo, sexy black leggings and sparkly top and jacket and her final costume, a lovely little black dress with sequin trim. Truly stunning in all of them.

The encore of 3 songs ended with that 80's Pop Classic "Just What  Always Wanted" which had everyone on their feet and brought the show to close. What a brilliant night. 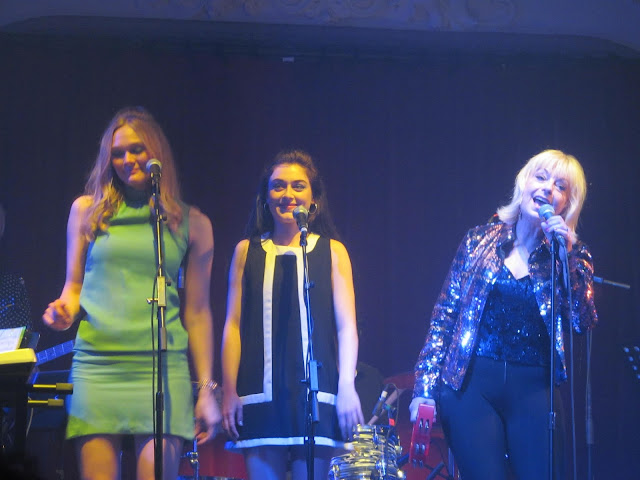 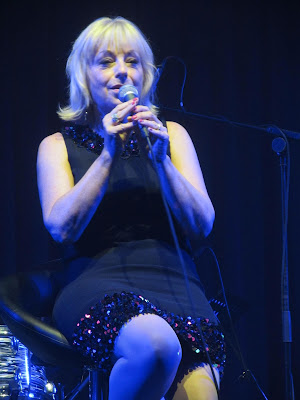 A mention has to be made about the support act. This was a solo Rockabilly gal, Emily Cappell with a rather good looking guitar. A pure young talent, who really entertained us with her self penned songs and a great wit. Each song had a story, mostly humorous, which made everyone giggle (wonder if her first love will ever find out!) and it was a great 20 minutes of entertainment. Here's hoping we get the chance to see her again, and hopefully she'll become a very successful singer/songwriter.